Picture-taking and video-recording duties on your Samsung Galaxy tablet are handled by the same app, the Camera app. You may be able to find a shortcut to that app on the Home screen, and it also dwells with all its app buddies on the Apps screen.

After starting the Camera app, you see the main Camera screen. 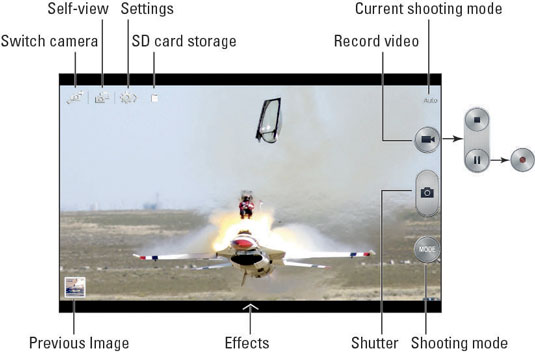 To take a still picture, touch the Shutter icon. The camera focuses, you may hear a mechanical shutter sound, and the flash may go off. You’re ready to take the next picture.

To preview the image or video, touch the Previous Image icon, which appears in the lower-left corner of the screen. After viewing the preview, touch the Back button to return to the Camera app.

How to take a self-portrait your Samsung Galaxy tablet

To take your own mug shot, follow these steps:

Touch the Switch Camera icon again to direct the Galaxy tablet to go back to using the main camera.

You can use the Self View icon to take a picture or record a video using both the front and rear cameras at the same time.

How to take in a panorama your Samsung Galaxy tablet

A is a wide shot, like a landscape, a beautiful vista, or a family photograph after a garlic feast. To take a panoramic shot using your Galaxy tablet, you need to switch the camera to Panorama mode and then capture several pictures in sequence. Obey these steps:

The Camera app sticks the different shots together, creating a panoramic image.

How to do a screen shot on your Samsung Galaxy tablet

A also called a (for capture), is a picture of your tablet’s touchscreen. So if you see something interesting on the screen, or just want to take a quick pic of your tablet life, you take a screen shot.

For the Galaxy Tab, as well as the Galaxy Note, you can enable a screen capture motion setting. Heed these directions:

Once the setting is enabled, you capture a screen shot by swiping left or right across the touchscreen with the side of your open palm. Upon success, you’ll hear a clicking sound. The screen has been captured.