Some users who have updated to new versions of OS X with Photos app have discovered that Photos app does not meet their needs, and thus would like to continue using iPhoto on the Mac. This is possible, at least for the time being, but there can be some hiccups in getting iPhoto running again in OS X Yosemite with Photos app installed. Visit the Macs /Applications/ folder and open iPhoto app to discover if you need to take further action or not, some users will have the app open just fine and need no further steps – you’re good to go at that point. But, not all OS X users are in that boat, and sometimes you’ll see the iPhoto icon has a cross through it signifying it won’t open.

Most commonly, Mac users will encounter the following error message when trying to launch iPhoto on a Mac with Photos app: “In order to open “iPhoto.app”, you must update to the latest version. The version of iPhoto installed on this Mac is not compatible with OS X Yosemite. Download the latest version for free from the Mac App Store.” but when you click on “Search App Store”, you’ll get an error saying “Item Not Available”. 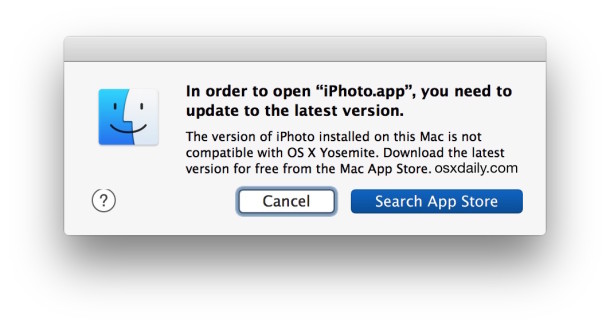 There’s a pretty simple fix to that series of errors however, and in just a moment or two you’ll be able to use the iPhoto app again if you wish. Here’s what you’ll need to do.

How to Run iPhoto in New Versions of OS X 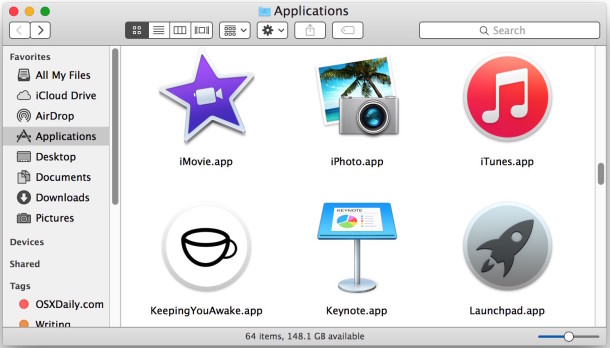 You’re back in iPhoto, if you have a photo library it will show up, if you don’t, you’ll be on a fresh iPhoto screen like so: 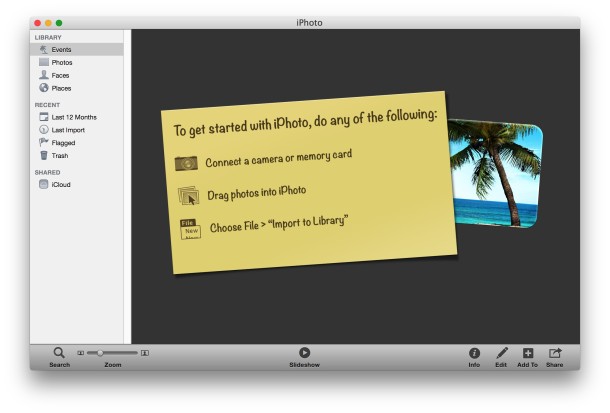 Though it’s certainly possible to run both iPhoto and Photos app on the same Mac, it’s best to not try to juggle using both the apps so as to not confuse or mess up an image library, users should really stick to one app or the other. If you really want to use both, be sure to create different photo libraries for both apps so they do not overlap while both in use. The Mac Photos app is the future, however, so migrating an iPhoto library over to Photos app and getting used to the new interface for photo management in OS X is the best course of action. Additionally, iPhoto is no longer supported by Apple, so while it may be helpful to be able to use the app, it’s not going to receive any further updates, and as a result, it’s going to be undoubtedly lose compatibility with future versions of OS X.

Generally speaking, running iPhoto on a new Mac with Photos app is not recommended, and unless you have a compelling reason to do so, it’s best to stick with Photos app in OS X Yosemite and moving onward.

If the above solution isn’t working for you for whatever reason, perhaps you don’t have internet access to download the last version of iPhoto, you can also launch iPhoto through the Terminal on a Mac – even if it’s an older version. To do that, issue the following command into the Terminal of OS X:

While that works to launch and use iPhoto, you’ll need to repeat that process each time you want to open the app, or setup a symbolic link, both of which is impractical for the average Mac user. As such, the terminal launch approach is really only recommended for troubleshooting purposes or those in a circumstance where limited usage of iPhoto is necessary, perhaps to gather or export a library before importing into Photos app, for example.